Anisha cuts out the body of her flower guitar. 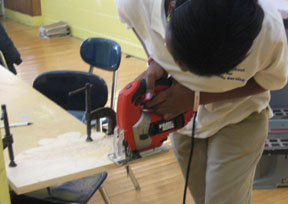 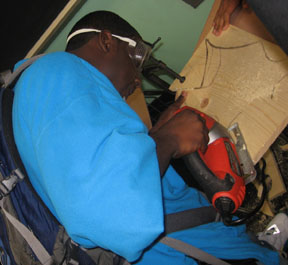 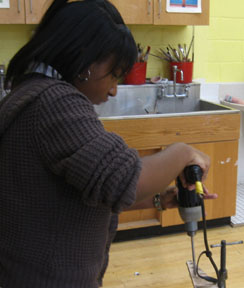 Crystal drills holes in the headstock of her guitar, for the tuning machines. 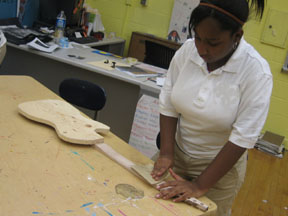 Ayonde saws out his guitar body. 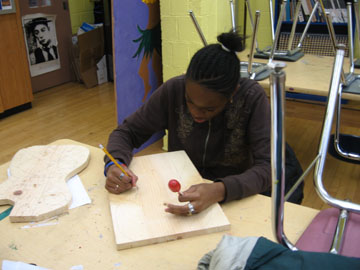 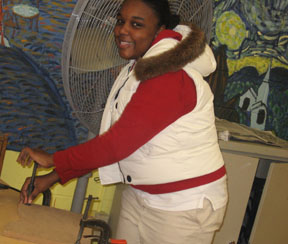 Another year... and a new group of students are making a new set of guitars. This year we have some more tools-- with the addition of a scroll saw, a bench saw and a drill press (all found at yard sales over the summer) and a belt sander. This time around, we are using real fret wire instead of making frets from umbrella spokes. We are setting the frets to an unconventional tuning system: 7-tone equal temperament. This means that instead of having the standard 12 notes (A, A#, B, etc.) we will have a seven-note scale with notes that don't correspond to the usual notes-- they fall in-between those notes, giving the scale a distinctive sound. This scale is used in parts of Africa, and in Indonesia, with variations. The "neutral" (in-between major and minor) third and seventh degree of the scale give it a "bluesy" sound. In fact, this scale is an ancestor to the blues; African people who were brought to the US, playing music on Western instruments, such as guitar, would bend the strings or slide with a bottleneck to get those sounds, or play minor thirds over major chords to evoke a similar mood. The blues are the root of virtually all American music, and this scale is the root of the roots. By applying it to the electric guitar, we come full-circle, drawing from the past to bring new life to contemporary music. Also, with the frets set this way-- there are no wrong notes! Every note on the instrument is in the scale. So it's perfect for beginning players who want to get creative right away.

Nadeesha prepares to cut out her guitar body with a jigsaw. What a smile! 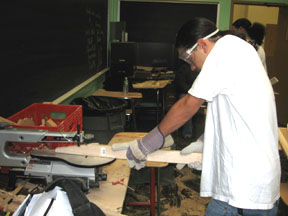 Francisco uses a scroll saw to make a guitar neck.
Shante draws the shape of her guitar body.
Crystal sands her guitar neck by hand, to get it extra smooth. 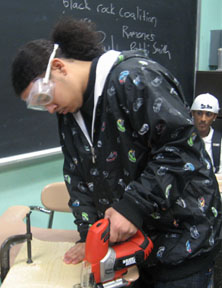 Nick saws his guitar body.
Tameeka and Anisha paint their guitar bodies... a skull and a flower. 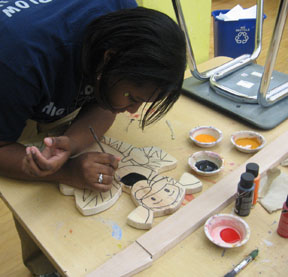 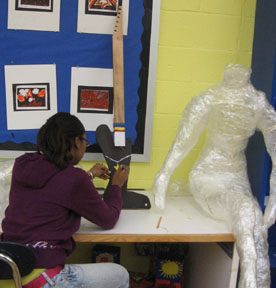 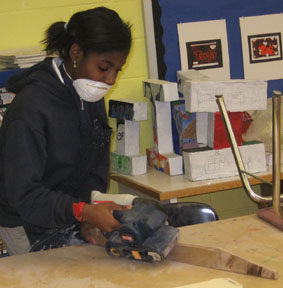 Taylor uses a rotary tool to smooth the edges of her boot guitar body. 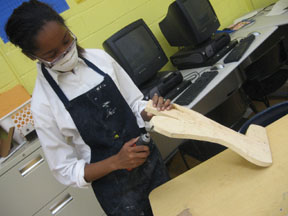 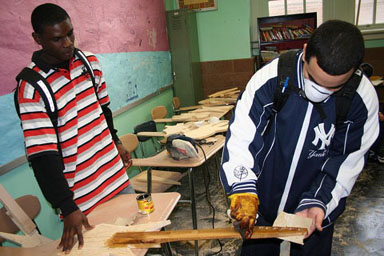 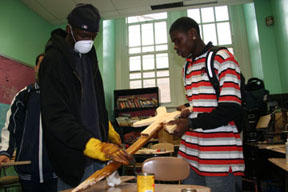 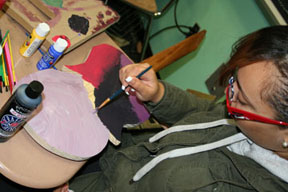 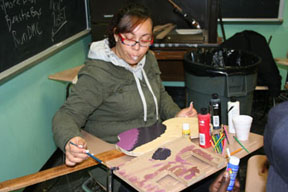 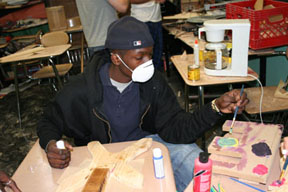 Rashid stains his guitar, with help from Seon
Seon helps Hector stain his guitar.
Anisha uses the belt sander to round the back of her guitar neck.